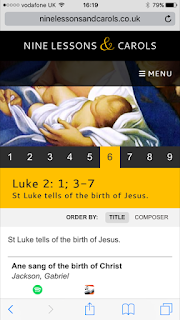 What happened was this... Last year I was planning the carol service at my church, St Mary the Virgin, Dover, England. It was about the millionth time I'd had to put together a service of lessons and carols, and I was getting a bit bored with all the Adam lay y-boundens and Sussex Carols we churned out every year.

I headed online to look for some inspiration, hoping to find something like, well... this. Amazingly enough, despite there being - no doubt - hundreds of choir leaders and worship planners in my exact same position, nothing like Nine Lessons and Carols appeared to exist on the web. And so it came to pass....

The first thing I did was contact all my friends and customers in the church and cathedral music world and ask them to send me the 2016 orders of service for their Nine Lessons and Carols. This gave me a solid foundation of new and interesting ideas on which to build the website. Then I contacted the amazing and talented Chris Tutthill at Whyte Studio, and asked him to put together a framework and design.

After we got that looking as we wanted it, the only thing remaining was to populate the website with ideas, and believe me, that has given me the most Christmassy July and August I've ever had. With the number of carols I've listened to, I could have planned my next Lessons and Carols about a hundred times over!

It's a pretty straightforward concept, such that I can't really believe no-one has done it before. There is a page for each lesson, the lesson introduction and text, and suggestions for carols that relate to that particular text. With each carol, where available, there is a YouTube link, a Spotify link and a link to buy the printed music from Forwoods ScoreStore at discounted prices. Simple as that!

I have to say, some of the YouTube recordings are better than others, and generally the Spotify ones are better engineered. Nevertheless, it gives you an idea of how each piece sounds.

I know there are some limitations to Nine Lessons and Carols as it stands at the moment. In particular, I'm aware that it is very SATB oriented. There are not many carols listed on there for upper voice choirs nor for male voice choirs. Of course, many of the carols that appear are also available in different versions, but it's not always easy to find YouTube or Spotify recordings of them. Please do send me a message via the online contact form if there's something particular you want. The online content will be developed, both between now and Christmas, and also into 2018.

Lastly, a note to composers and publishers... Please don't feel aggrieved if your work doesn't appear on here. If your work is a/ available for sale in the UK through a mainstream music publisher, and b/ exists on YouTube or Spotify in a decent recording, then tell me about it, and I'll add it.

Well, I hope you find it useful. It has been something of a labour of love. Enjoy listening to all these lovely Christmas pieces - I have!
Posted by Swellpedal at 08:49 No comments:

On the Passing of a Gentleman (2)

You may remember my post (On the Passing of a Gentleman) of August 2014, written in response to the death of my father-in-law. Well, bereavement has once again forced me to take solace in language, and attempt to express in print my feelings on the death of my father, John Yarrow, on 30th April 2017.

This entry will be a little different though, as it will focus more on the difficult hours after Dad's passing, than those leading up to it. It has been tough to write, and is not the thing to read if you need a pick me up!

John Yarrow had been a choral singer all his life, and at Easter 2015 celebrated 70 years of singing in church choirs, first as a nine-year-old at St Andrew's, Buckland-in-Dover, and latterly at St Mary's Dover, where for the past seventeen years it has been my privilege to serve as Director of Music. A bricklayer by trade, he spent most of his working life in local government, retiring at the age of 57 from Kent County Council, where had been responsible for waste disposal management across East Kent.

In retirement, he looked after the fabric of St Mary's Church, earning the respect of the church architect and the Diocesan authorities for the professional way he ran affairs. A keen sportsman in his youth, selected for cricket teams not for his batting or bowling but for his athleticism in the field, in later years he took to the bowling green, where his formidably competitive nature ensured a highly decorated career, serving also as Chairman of Kearsney Bowling Club for over 25 years.

Two days after the Easter anniversary mentioned above, Dad was taken ill, and so began the relentless decline which culminated in his death in the early hours of Sunday morning. Suffering from Parkinson's Disease and cancer, he was cared for at home, chiefly by my sister Debbie, with wonderful support from Inchwater Care (if you need them, use them, they will never let you down), Dad was eventually admitted to Pilgrims' Hospice, Canterbury, on Friday evening. Helplessly frail, that once athletic frame, reduced to almost complete immobility.

[As an aside, when they were raising funds for the building of the original Hospice in 1981, Dad organised a performance of Messiah at St Andrew's Church. How prescient of him!]

His stay there, though short, was surrounded by love and the finest care from the staff, both for him and for his family, who kept vigil throughout Saturday. Through the marvel which is smart phone technology, we were able to play him his favourite pieces of choral music. In Zadok the Priest, at 'God save the King' his body seemed to brace itself for the entry, his eyebrows lifted. Singer to the core.

At around 6pm we thought we were losing him, but by mid-evening he appeared to stabilise. Mum, who has Alzheimer's, was so tired we decided to take her home rather than expect her to sit through the night. By 11.30, Debbie and my brother Mark concluded, too, that he was stable, and headed for home.

At midnight we were summoned back, but to our everlasting regret we were just too late, as Dad slipped away at 12.10, with the nurses holding his hands. He will have liked that.

It was typically stubborn of him, to do things on his own terms.

Mum was asleep at home. We decided not to wake her, and agreed to meet at 8.30am to break the news. And so it was that we appeared on her doorstep yesterday morning, which is really, despite everything you have already read, where this article begins.

It was, of course, the most difficult thing that any of us has ever done. Her devastation at the initial news was compounded by the discovery that none of the family had been with him. In the backs of our minds had been the suspicion that, due to her condition, the news would not sink in, but we hoped, perversely, that it would be such a seismic shock that she would retain it. By lunchtime all was calm, so that we were able to raid the supermarket for provisions and have a quick bite to eat. A friend of the family arrived with flowers and hugs, and all - notwithstanding the circumstances - seemed well.

"Can you just remind me where Dad is?"

And at once we knew how the ensuing hours, days and possibly months would go. Having had to break the news that her beloved husband of 58 years had died, we would have to brace ourselves and go through the same agonising routine time and again. We decided to edit the narrative. Version 2.0, as it became known, had Mark & Debbie at Dad's bedside as he died. Forgive us our little white lie. It made her feel just a tiny bit better. Still, Mum was upset she had not been there. Perhaps there would have to be a Version 3.0 later.

One or other of us was with her all day, up until late evening. Was it seven or eight times we had to repeat the news? We lost count eventually. Mum has been struggling with gradual memory loss for many years. It's hard to believe the lady we see before us now was a Churchwarden for fourteen years.

The loss of our father John has, of course, been devastating for us all, but the nature of his ailments mean we have been preparing for this day for a couple of years. What became clearer yesterday was the extent to which Mum's Alzheimer's mean she is already partly lost to us. When I had to break the news for the third time I was alone with her. I had to bring down an emotional shutter, to tell myself that I was speaking through her illness in an attempt to reach my mother within. With each telling of the news, it became just a little bit easier, but sleep very often tends to reset her mind, so who knows where we will start from on Day 2.

It was an exhausting, awful day, cheered by some laughs among the tears, and uplifted by the prayers, goodwill messages and love of friends. Just a few days before I had sat with Dad and listened to some favourite hymns and psalms. How he loved singing the psalms, in particular! Included were these words:

I will hold the Christlight for you
in the nighttime of your fear;
I will hold my hand out to you,
speak the peace you long to hear.

I will weep when you are weeping;
when you laugh I'll laugh with you;
I will share your joy and sorrow,
till we've seen this journey through.

When we sing to God in heaven,
we shall find such harmony,
born of all we've known together
of Christ's love and agony.

Let us see what Monday brings.